DOJ IS PROTECTING THE CORRUPT SILICON VALLEY OLIGARCHS AND THEIR MONOPOLIES...BUT ON WHOSE ORDERS?

His tweets criticize Facebook and Google, but the Antitrust Division of the Justice Department is making life easier for potential monopolists in Silicon Valley.

By Matthew Buck and Sandeep Vaheesan 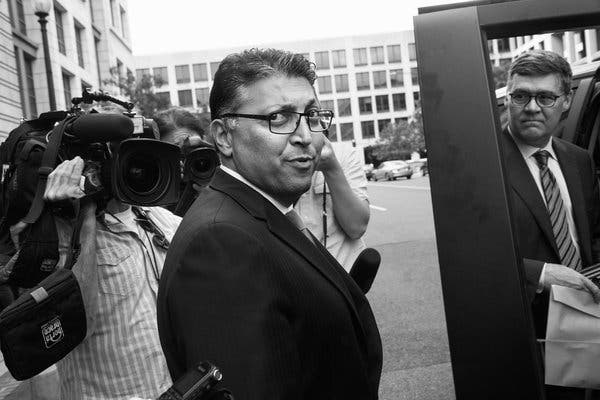 At his Senate confirmation hearing, Attorney General William Barr signaled an interest in confronting the power of big tech corporations like Facebook and Google. As Mr. Barr put it, a lot “of people wonder how such huge behemoths that now exist in Silicon Valley have taken shape under the nose of the antitrust enforcers.” And since taking office, President Trump has repeatedly attacked America’s biggest technology corporations, especially Amazon, Facebook and Google. Among other accusations, he has charged Amazon with ripping off the Post Office and Google with censoring conservative users. He recently criticized Facebook, Google and Twitter for “ridiculous” bias in favor of Democrats. By most appearances, Mr. Trump is a foe of big tech.

Mr. Barr, however, will find that those “huge behemoths” will continue to dominate, because, in part, the administration’s chief antitrust enforcer is their champion. On top of granting tech platforms huge windfalls in his tax reform law, Mr. Trump appointed a friend of big tech, Makan Delrahim, to lead the Antitrust Division of the Department of Justice. Mr. Delrahim has consistently promoted the interests of the biggest tech companies.

While we believe Mr. Delrahim, a veteran corporate defense lawyer and antitrust official in the George W. Bush administration, was correct on the merits in trying to stop the AT&T/Time Warner merger, that action was an outlier. In a Senate hearing in December, he boasted that he “strengthened” the Justice Department’s amicus brief program as a means of reshaping antitrust law. In its briefs, which represent the views of the federal government as an expert in antitrust law and are influential in court, the department has supported legal interpretations that would make Amazon, Google, Facebook and other dominant firms more powerful. On top of looking into possible procedural improprieties between the president and Mr. Delrahim, Congress should demand an explanation for — and put a stop to — Mr. Delrahim’s under-the-radar effort to revise antitrust law.

In the most prominent case, Apple v. Pepper, the Supreme Court will decide, any day now, whether ordinary Americans can hold tech platforms accountable. The Antitrust Division filed briefs siding with Apple. (Our organization, the Open Markets Institute, filed an amicus brief in support of Pepper.) In its briefs, the Justice Department argued that iPhone users should not be able to sue Apple for monopolizing the sale of iPhone apps. Although the text of federal law grants everyone (consumers, workers and businesses) the right to sue antitrust violators for damages, the Justice Department is seeking to restrict private citizens’ ability to hold corporate power to account. In contrast, a bipartisan coalition of 31 states filed a brief endorsing the right of all consumers to obtain compensation and be made whole.

The Justice Department took an even more radically pro-monopolist position in a lower court case. In Viamedia v. Comcast, the Seventh Circuit in Chicago is now deciding whether Comcast, which both operates and competes in the clearinghouse for TV advertisements in Chicago and Detroit, illegally monopolized this clearinghouse when it blocked Viamedia, an ad management company. Through such “refusals to deal,” monopolists can suppress emerging competition or extend their dominance into new markets.

The government sided with Comcast, advising the court to adopt then-10th Circuit Judge Neil Gorsuch’s 2013 decision in Novell v. Microsoft, which broadly insulates a monopolist from the charge that it improperly cut off rivals’ access to a good or service they need to compete. Under Novell, if someone sues a monopolist for refusing to deal with competitors, the conduct is illegal only if the monopolist “sacrificed profits” in the process and that its sole effect was to hurt competition. This standard would make stopping “refusals to deal” virtually impossible.

The Antitrust Division’s position in Viamedia is especially helpful to Google and Facebook, whose core services are free to users. Consider Facebook’s 2013 decision to cut off users’ friend lists from Vine, a video streaming app launched by Twitter. Thanks to Facebook’s move, users of Vine could not invite friends to join the app. Under the standard endorsed by the Justice Department, Facebook would be protected from legal liability for stifling Vine unless an antitrust enforcer could show that Facebook sacrificed profits in this predatory act. Because Facebook does not charge users, this would be a tall order for the government, excluded rivals and injured consumers.

Along with these pro-monopoly briefs, the Antitrust Division’s leadership has publicly expressed almost uncritical admiration for technology giants. Disregarding both congressional intent in enacting the antitrust laws and the latest evidence on the economic and political harms from corporate concentration, our top antimonopoly enforcers have been fawning over monopoly.

Mr. Delrahim and his deputies routinely praise the biggest tech companies and adopt their legal rationalizations. In a speech in Mexico City in November, he asserted on the basis of little evidence that “market power is a motivating factor for investment in a free-market economy” and disparaged rules to protect competitive markets as akin to “breaking a man’s leg to make him run faster.” Mr. Delrahim recently hypothesized that “large digital platforms have grown because they provide innovative and disruptive services that consumers seem to like and want to use” and expressed nationalistic pride in the dominant tech platforms being American. Contrary to these claims, however, actions by the European Commission and documents published by Britain’s Parliament indicate that the tech platforms have used abusive practices to maintain and extend their power.

The division dresses up its actions in the rhetoric of humility. In a June 2018 address, Barry Nigro, a deputy assistant attorney general at the Antitrust Division, said that when enforcing antitrust law, “First, we should do no harm,” and warned, “we should be wary of trying to prescribe the correct path forward.”

Yet, as the Justice Department’s top antitrust enforcers proclaim humility and practice restraint when it comes to monopolies, they do not extend this courtesy to elected officials. Cities and states seeking to structure markets through the democratic process can expect hectoring, not humility, from the department.

The Justice Department has, to the benefit of Uber and Lyft, interfered with municipal efforts to improve the lives of ride-hailing drivers. These drivers, on average, earn less than the local minimum wage in many places. In November 2017, the Department of Justice (as well as the Federal Trade Commission) filed a brief against Seattle’s law granting collective bargaining rights to ride-hailing drivers.

The Justice Department has also weighed in on the legality and wisdom of state rules on, for example, the practice of law. In a statement of interest in a case challenging a Florida bar’s rule, the Antitrust Division paid tribute to “new competition from mobile platforms that can profoundly change an industry.” This type of free-standing policy lecture voices a hostility to democratic market structuring and is outside the division’s statutory duty to police corporate cartels, mergers and monopolies.

When trying to understand the Trump administration’s position on tech monopolists, ignore Mr. Trump’s tweets and look to what his antitrust enforcers do and say. Mr. Trump’s antitrust chief is hindering the ability of federal, state and local governments and the public to tame the power of tech giants. Instead of this deference to corporate power and condescension to our elected representatives, the department should be confronting monopolies in tech and elsewhere and respecting the policy choices of state and local officials.