Roughly a century ago, men like William Randolph Hearst, Joseph Pulitzer and Henry Luce dominated the media landscape. These moguls built their publishing empires and used them to intimidate rivals, espouse favored causes and settle scores.

Today, members of a new Gilded Age are again in control of many of the country’s most venerable media outlets. Only now, it is tech entrepreneurs, casino magnates and hedge fund billionaires who are seizing control of the press, simply by writing a check.

In the most recent transaction, Marc Benioff, the founder of the software company Salesforce, bought Time magazine on Sunday for $190 million in cash.

With the deal, Mr. Benioff joined an elite club of relatively new press barons that includes the Amazon founder Jeff Bezos, who owns The Washington Post; Laurene Powell Jobs, the widow of the Apple co-founder Steve Jobs and the head of the Emerson Collective, who acquired a majority stake in The Atlantic; and Michael R. Bloomberg, who owns Businessweek and Bloomberg News. At a moment when many print publications are struggling to survive, the largess of a wealthy owner can seem like a godsend. But there are also fresh concerns, some based on recent experience, that these individuals are assuming an unhealthy amount of influence. “Even good billionaires need to have less of a role in our public life,” said Anand Giridharadas, author of “Winners Take All,” a new book about the global elite. “They are buying up the free press, which is meant to hold them accountable.”

Beyond the marquee names, local billionaires now own the daily newspapers in Minneapolis, Las Vegas, Los Angeles and Boston. Smaller outlets — including The Village Voice, The New Republic and Gothamist — were also bought by wealthy individuals in recent years.

And all of this is happening as the business model for print and online journalism remains precarious at best.

“We have a new era, particularly in the last few years, of billionaire owners from the new economy who are intrigued by this old dilemma,” said Tom Rosenstiel, executive director of the American Press Institute, a journalism advocacy group.In some cases, these new owners succeed in revitalizing the publications they acquire, injecting them with new energy and freeing them from the pressures of short-term profits, while preserving editorial independence. By all accounts, Mr. Bezos has refrained from meddling in the news or the editorial operations of The Washington Post, where the newsroom has grown significantly under his ownership. Ms. Jobs has earned similarly high marks for her work at The Atlantic over the last year. Businessweek was reinvigorated under Mr. Bloomberg’s ownership. The new owner of The Los Angeles Times, Patrick Soon-Shiong, is investing in the paper, and has pledged to allow it to operate with editorial independence. And in Minnesota, a local businessman, Glen Taylor, has drawn praise for his ownership of The Minneapolis Star Tribune, which he bought for about $100 million in 2014. “Jobs and Bezos and presumably Benioff, these people are doing good work,” said Craig Newmark, the founder of Craigslist, who recently donated $20 million to the CUNY Graduate School of Journalism. “Anything that helps independent journalism is a good thing.”

But just as often, it seems, the new owners of newspapers and magazines can sap newsroom morale, or quickly discover that they have little tolerance for financial losses, or unions. After Chris Hughes, a co-founder of Facebook, bought The New Republic six years ago and tried to remake it — leading to the exodus of many longtime members of its staff — he eventually sold it.Image 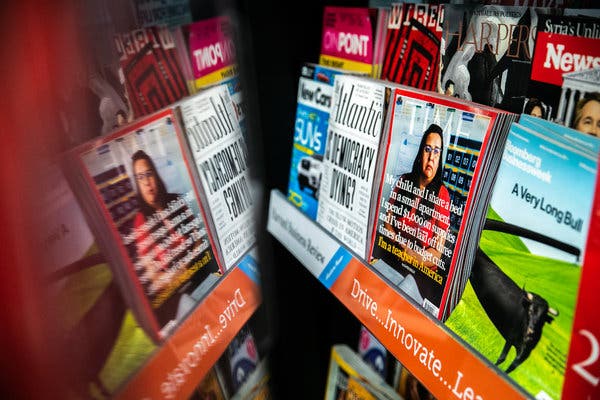 Peter D. Barbey, the heir to a retail fortune who bought The Village Voice in 2015 and pledged to support it, recently closed it.

And last year, Joe Ricketts, the billionaire founder of TD Ameritrade, shut down Gothamist and DNAinfo after its writers voted to unionize.

“Being owned by a local billionaire is not necessarily an act of charity,” Mr. Rosenstiel said. “There are clearly billionaires who are buying up publications because they want to influence political discourse in the country.”

At The Las Vegas Review-Journal, which the casino magnate Sheldon Adelson bought in 2015, reporters and editors have been concerned about what they perceive as his editorial interference.

Even John Henry, who made a fortune with his investment firm and is well regarded as the owner of The Boston Globe, has recently expressed some distaste for the economics of print media.

“The Globe cannot ever seem to meet budgets — on either the revenue side or the expense side — and I am not going to continue that,” he said in an interview with WGBH in July. “This has always been about sustainability rather than sizable, endless, annual losses. That is frustrating and due to a combination of mismanagement and a tough industry.” For much of the 20th century, print publications were largely owned by private companies — often helmed by families like the Scrippses and the Chandlers — that had started a publication in one city and gradually expanded. By the 1970s, consolidation and ample profits from print advertising led many of these companies to go public. But in the late 1990s, advertising on the internet began to chip away at print profits. And in recent years, many once-proud print empires have consolidated, others have been sold for parts, and some papers and magazines are simply going out of business.

Amid this turmoil, the new generation of wealthy buyers has emerged. But while buying a high-wattage publication can deliver an owner a certain amount of status and prestige, it can also invite controversy.

President Trump, displeased with coverage of his administration in The Washington Post, has taken to attacking Amazon on Twitter, even though Mr. Bezos — not Amazon — owns the newspaper.

And Mr. Benioff may find himself facing the ire of Mr. Trump should Time continue publishing tough covers that portray the president in a critical light. (Mr. Benioff has sparred with members of the administration in the past. In 2015, when Vice President Mike Pence was the governor of Indiana, Mr. Benioff threatened to reduce Salesforce’s business there in protest of a state law that critics said discriminated against people who are gay or transgender.)

Walter Isaacson, a former editor of Time, said that for most of his career, he had believed that the best owners for media companies were publicly traded corporations, where there was less of a chance for a wealthy owner to meddle. That changed, he said, during his tenure at Time. “Then I went through the disaster of Time Warner, a company that only cared about short-term stock price and didn’t have a feel for journalism,” he said. Now, Mr. Isaacson said, “I have come to the belief that a sole proprietor, especially a benevolent and public spirited one, is a good thing in troubled times.” Mr. Giridharadas, however, remains skeptical that ultrarich individuals, however public spirited, are the best owners for the free press. “I’m concerned about the powerful having an oligopoly of the media,” he said. “The only amount of power that a billionaire should have over a paper they own is zero.”

David Gelles is the Corner Office columnist and a business reporter. Follow him on LinkedInand Twitter. @dgelles