"I think that when the left found out that Facebook, a tool built by Silicon Valley, helped elect President Trump, they weren't very happy," Parscale told CBS This Morning. "And I think that you have multiple platforms I call the 'Palo Alto mafia' trying to stop that."

In the interview, Parscale credited the Trump campaign's dominance in Facebook advertising as a key contributor to its success in 2016. He referenced the wide gap between the number of Facebook ads Trump and Hillary Clinton placed during the run up to the election. Trump's team placed 5.9 million ads compared to Clinton's 66,000. -CNBC

Parscale, who was promoted to Trump's 2020 campaign manager after spearheading his digital media strategy in 2016, was originally hired to build a website for Trump's exploratory campaign in 2015.

Trump and other conservatives have slammed social media platforms over allegations of anti-Republican bias. In July, Trump accused Twitter of "shadow banning" prominent Republicans, vowing to "look into this discriminatory and illegal practice at once!"

Twitter “SHADOW BANNING” prominent Republicans. Not good. We will look into this discriminatory and illegal practice at once! Many complaints.

Trump's tweet came after Brad Parscale, along with Republican National Committee (RNC) Chairwoman Ronna McDaniel, wrote a letter in May calling for the CEOs of Facebook and Twitter to address concerns over conservative censorship ahead of the 2020 election, as well as a call for transparency.

"We recognize that Facebook and Twitter operate in liberal corporate cultures," the letter reads. "However, rampant political bias is inappropriate for a widely used public forum."

In August, President Trump tweeted that Google is "controlling what we can & cannot see. This is a very serious situation-will be addressed!"

Google search results for “Trump News” shows only the viewing/reporting of Fake News Media. In other words, they have it RIGGED, for me & others, so that almost all stories & news is BAD. Fake CNN is prominent. Republican/Conservative & Fair Media is shut out. Illegal? 96% of....

....results on “Trump News” are from National Left-Wing Media, very dangerous. Google & others are suppressing voices of Conservatives and hiding information and news that is good. They are controlling what we can & cannot see. This is a very serious situation-will be addressed!

The GOP controlled congress has explored the issue throughout 2018, with executives from Facebook, Google and Twitter testifying before lawmakers over issues of bias and security breaches.

In April, Facebook CEO Mark Zuckerberg was questioned on the issue at a congressional hearing.

"There are a great many Americans who I think are deeply concerned that that Facebook and other tech companies are engaged in a pervasive pattern of bias and political censorship," Sen. Ted Cruz, R-Texas, said at the time.

The companies have all said that they do not filter content based on political ideology. -CNBC

And while Facebook and Twitter are allegedly filtering individual users on their platform, Google has been accused of biased search results, providing support to Hillary Clinton in the 2016 election, and making conservative employees feel uncomfortable expressing their opinions. In September, Breitbart obtained and published a leaked video of Google's top executives crying and comforting each other as they mourn Hillary Clinton's 2016 election loss. 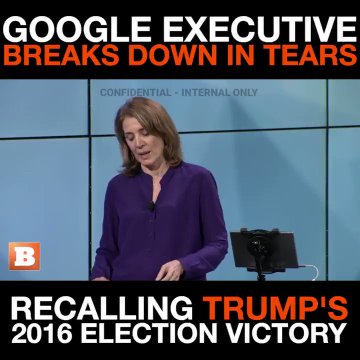 This is the CFO of @Google breaking into sobs in a confidential internal video taken right after her goddess, @HillaryClinton, lost the 2016 election. These people contend that there is no political bias at #Google.

.@google needs to explain why this isn’t a threat to the Republic. Watch the video. Google believes they can shape your search results and videos to make you “have their values”. Open borders. Socialism. Medicare 4 all. Congressional hearings! Investigatehttps://www.breitbart.com/tech/2018/09/12/leaked-video-google-leaderships-dismayed-reaction-to-trump-election/ …

Leaked footage shows Google's leadership team - including its CEO and Co-founders - reaction to the election of Donald Trump. | Tech

This, of course, isn't the first evidence of Google doing all they could to help Hillary win the election. In an April 15, 2014 email from Google's then-Executive Chairman Eric Schmidt found in the WikiLeaked Podesta emails, titled "Notes for a 2016 Democratic Campaign," Schmidt tells Cheryl Mills that "I have put together my thoughts on the campaign ideas and I have scheduled some meetings in the next few weeks for veterans of the campaign to tell me how to make these ideas better.  This is simply a draft but do let me know if this is a helpful process for you all." 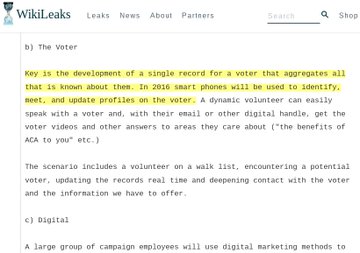 Parscale claims that even if social media companies exclude conservatives, people will always find a way to spread ideas.

"There are lots of things they can't stop," said Parscale. "And I think one of the big emerging technologies is just your cell phone, direct, rich media, and text messaging, and the things we can do directly through your phones."