Skip to content
Breaking News
(REPAIRING SILICON VALLEY) Why Don’t They Arrest The Oligarchs That Organize Voting Fraud Programs? (REPAIRING SILICON VALLEY) ***** THE LITHIUM LIE – WHEN BATTERIES KILL LITTLE KIDS WHO WORK IN THE BATTERY MINES FACEBOOK AND GOOGLE ARE POLITICAL PROPAGANDA MACHINES JUST LIKE HITLER’S PROPAGANDA MACHINES The Sex Perverts Of Google – How A Company Run By Pedos Took Over Global Media (WORLD NEWS) IT TURNS OUT THAT DUCKDUCKGO DOES SPY ON YOU

The two primary investors in EcoMotors are Khosla Ventures and Bill Gates. Vinod Khosla, who founded Khosla Ventures in 2004, was founder and CEO of Sun Microsystems and formerly a general partner at Kleiner Perkins.

In April 2013 EcoMotors announced a deal to have Chinese auto parts giant Zhongding Power build a $200 million factory in the Anhui Province in eastern China. The factory hoped to produce 150,000 OPOC engines per year, with a further site reserved to take production to 400,000.[1] The engineblocks will be made of CGI ( compacted graphite iron) and will be produced at a fully automated Zhongding foundry in Anhui by a licence from Sintercast of Sweden which is the world leader in CGI-technology. The production was first annonced to commence in 2014 but is now delayed to the second half of 2015. [2] 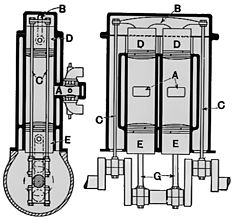 The OPOC engine is an opposed-piston 2-stroke engine. The OPOC is a reciprocating internal combustion engine in which each cylinder has a piston at both ends, and no cylinder head. There are no valves or a cylinder head.[3]

The OPOC engine can be moduled with two, or more, engines coupled via an electric clutch between engines. When more power is needed the second engine is clutched in. When clutched out of service there are no friction or pumping losses from the second engine module. This arrangement in city running vehicles could have a small, highly economical engine as the prime engine and when accelerating hard, or pulling heavy loads, the second, or more, engines are clutched into service.[4]

HOW CORRUPT IS TESLA MOTORS?

MUSK BUYS MEDIA PROMOTION TO COVER UP HIS SOCIOPATH SICKNESS

REPORTING AND TERMINATING CORRUPTION IN SAN FRANCISCO AND WASHINGTON DC

As usual, The U.S. made a breakthrough battery discovery — then gave the technology to Hunter Biden’s buddies: China

BEING A DEPARTMENT OF ENERGY WHISTLEBLOWER

THE NUMBERS PROVE THE CORRUPTION CRIMES BY U.S. SENATORS

FACEBOOK IS A CORRUPT EMPIRE OF EVIL SAY INSIDERS

HOW MUCH DAMAGE CAN A WHITE HOUSE ORDERED ATTACK CAUSE A CITIZEN?

Who Does The White House Hire To Attack You If Your Speak Up?

THE DIRTY BASTARDS IN CONGRESS THAT RUN A TECH CARTEL

How You Know When Government Insiders Are F*cking You Royally!

How To Win 100% Of Your Political Corruption Lawsuits

HOW TO BYPASS SILICON VALLEY’S CONTROL OF THE WORLD