Home » Google CEO found to be ruining Google Because He Gets Paid To Much!

The highest-paid CEOs tend to run some of the worst-performing companies, according to new research.

But the same amount invested in the companies with the lowest-paid CEOs would have grown to $367 (£279) over a decade.

Titled Are CEOs paid for performance? Evaluating the Effectiveness of Equity Incentives, the report looked at the salaries of 800 CEOs at 429 large and medium-sized US companies between 2005 and 2014 and compared it with the total shareholder return of the companies. 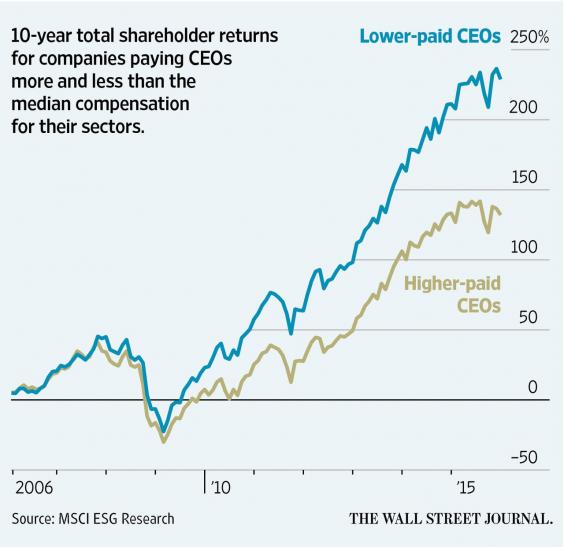 The report notes: “Equity incentive awards now comprise 70% or more of total summary CEO pay in the United States, based on our calculations. Yet we found little evidence to show a link between the large proportion of pay that such awards represent and long-term company stock performance.

Recommending the focus shift away from annual reports to longer-term performance, it adds: “Closer scrutiny of the relationship between CEO pay and performance over longer time periods could lead to different conclusions.”

Ric Marshall, a senior corporate governance researcher at MSCI, said in a statement: “The highest paid had the worst performance by a significant margin. It just argues for the equity portion of CEO pay to be more conservative.”

p dir=”ltr”>“Whether you look at the entire group or adjust by market-cap and sector, you really get very similar results.”

Who Does The White House Hire To Attack You If Your Speak Up?

PROOF THAT GOOGLE AND THE SILICON VALLEY CARTEL DEFRAUDED THE U.S. GOVERNMENT AND TAXPAYERS:

Much of this news Wiki is from folks blogging about their eye-witness experience with political corruption, cronyism, insider trading bribes and Silicon Valley's sex trafficking.

HOW TO BUILD THE FUTURE

Facebook Gives Your Data Out to Prosecute You for Abortion

OUR STATEMENT TO CONGRESS ON POLITICAL CORRUPTION

MUSK BUYS MEDIA PROMOTION TO COVER UP HIS SOCIOPATH SICKNESS

REPORTING AND TERMINATING CORRUPTION IN SAN FRANCISCO AND WASHINGTON DC

As usual, The U.S. made a breakthrough battery discovery — then gave the technology to Hunter Biden’s buddies: China

BEING A DEPARTMENT OF ENERGY WHISTLEBLOWER

THE NUMBERS PROVE THE CORRUPTION CRIMES BY U.S. SENATORS

FACEBOOK IS A CORRUPT EMPIRE OF EVIL SAY INSIDERS

HOW MUCH DAMAGE CAN A WHITE HOUSE ORDERED ATTACK CAUSE A CITIZEN?