Robert Lane Gibbs (born March 29, 1971) is an American political advisor and commentator who served as the 28th White House Press Secretary during the first term of the Barack Obama's presidency.[1] Gibbs has worked with Obama since 2004 and previously served as the communications director for then-Senator Obama and his campaign during the 2008 presidential election. He later served as a senior campaign adviser for Obama's campaign during the 2012 presidential election.[2] Prior to becoming a member of the Obama team he was press secretary for John Kerry's 2004 presidential campaign and was a part of several Senate campaigns, having served as communications director for the Democratic Senatorial Campaign Committee and for four individual Senate campaigns, including those of Obama in 2004 and Fritz Hollings in 1998.[3] Gibbs was also the press secretary of Representative Bob Etheridge.[4] Gibbs was announced as the press secretary for President Obama on November 22, 2008.[5] and officially assumed the role on January 20, 2009, giving his first official briefing on January 22. On January 5, 2011, Gibbs announced that he would leave the White House to become an outside adviser to the administration. He formally left the position on February 11, 2011. On February 12, 2013, it was announced that Gibbs had been hired as a contributor for cable-news channel MSNBC. His first appearance was on the same night prior to the 2013 State Of The Union Address. In June 2013 it was announced that Gibbs became a founding partner of a new strategic communications practice called The Incite Agency,[6] which he co-founded.

Gibbs was born in Auburn, Alabama.[7] His parents, Nancy Jean (née Lane) and Robert Coleman Gibbs, worked in the Auburn University library system and involved their son in politics at an early age.[1][8][9] Nancy Gibbs would take Robert, then known as "Bobby," to local League of Women Voters meetings rather than hire a babysitter, and involved him in "voter re-identification" work at the county courthouse.[10] Gibbs attended Auburn City Schools and Auburn High School.[7] At Auburn High, Gibbs played saxophone in the Auburn High School Band, was a goalkeeper on the Tigers' soccer team, and participated in the school's debate squad. Gibbs graduated from Auburn High in 1989,[11] in the same class as novelist Ace Atkins and LEGO artist Eric Harshbarger. Gibbs went on to attend North Carolina State University, serving as goalkeeper for the North Carolina State Wolfpack soccer team from 1990 to 1992.[12] Gibbs graduated from North Carolina State cum laude with a B.A. in political science in 1993.[4]

While a student at North Carolina State in 1991, Gibbs became an intern for Alabama's 3rd congressional district Congressman Glen Browder. Gibbs quickly rose through the ranks of Browder's staff, rising to become the representative's executive assistant in Washington, D.C. Gibbs returned to Alabama in 1996 to work on Browder's unsuccessful Senate campaign that year.[10] In 1997, Gibbs was press secretary for Congressman Bob Etheridge of North Carolina and, in 1998, was spokesman for Senator Fritz Hollings' successful re-election campaign.[4] Gibbs worked in the campaigns of two other senators and served as communications director for the Democratic Senatorial Campaign Committee, before taking the position of press secretary of John Kerry's 2004 presidential campaign.[4]

Gibbs joined Barack Obama's 2004 U.S. Senate campaign as communications director in mid-April 2004[16] and remained with the senator through the first two years of Obama's term. Gibbs is credited with guiding Obama through those first years and molding his rise on the national scene. According to The New York Times, Gibbs advised Obama on politics, strategy and messaging, and spent more time with Obama than any other advisor.[2] 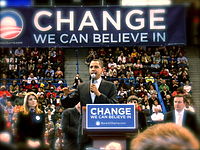 The appointment of Gibbs by Obama to the post of communications chief was met with mild controversy by some critics in the Democratic National Committee, who cited Gibbs' role in the aggressive campaign tactics used to block the nomination of Howard Dean in the 2004 race. Obama, however, referred to Gibbs as his "one-person Southern focus group" and welcomed him as part of his close-knit team that included strategist David Axelrod, campaign director David Plouffe, and research director Devorah Adler. In his communications role, Gibbs became known as "the enforcer" because of his aggressive rapid-response methods for countering disinformation tactics from opponents. Gibbs assumed responsibility for "shaping the campaign message, responding to the 24/7 news cycle, schmoozing with the press and fighting back when he disagree[d] with its reporting."[17] As the chief intermediary between the Obama campaign and the press, Gibbs sought to counter the Republican National Committee's opposition research tactics against Obama in early 2007.[18] Gibbs adopted a policy of rapid response to claims by conservative news outlets that questioned Obama's religious upbringing. In response to the "Obama is a Muslim" meme suggested by these claims, Gibbs disseminated information to other news networks that Obama is not nor has ever been Muslim. At the time, Gibbs said, "These malicious, irresponsible charges are precisely the kind of politics the American people have grown tired of."[19] After comments by George W. Bush to the Israeli Knesset questioning Obama's foreign policy platform's focus on international diplomacy, Gibbs responded, calling Bush's comments "astonishing" and "an unprecedented attack on foreign soil." Gibbs argued that Bush's policy amounted to "cowboy diplomacy" that had been discounted by Bush's own Secretary of Defense, Robert Gates, and quoted with Gates' own words: "We need to figure out a way to develop some leverage ... and then sit down and talk...if there is going to be a discussion, then they need something, too. We can't go to a discussion and be completely the demander, with them not feeling that they need anything from us."[20] He was widely blamed by news media executives for "holding hostage" reporters, while Obama and Hillary Clinton met for the first time after a heavily-contested Democratic primary season. He countered back, “It wasn't an attempt to deceive in any way ... It was just private meetings.”[18]

On November 22, 2008, it was announced by the Obama Transition Team that Gibbs would be the White House Press Secretary for the Obama administration.[5] He assumed the role of press secretary on January 20, 2009, and gave his first official briefing on January 22. In an interview with The Hill, Gibbs derided the “professional left” and "liberals," who “wouldn’t be satisfied if Dennis Kucinich was president.” He said that people who compare Obama's policies to George W. Bush's "ought to be drug tested.” [21] Gibbs stirred controversy when he stated that the drone killing of 16 year old son of Anwar al-Awlaki was justified, and that the boy "should [have] had a more responsible father."[22][23]

Gibbs is married to Mary Catherine Gibbs, an attorney, and lives in Alexandria, Virginia with their son, Ethan.[17] His parents live in Apex, North Carolina, where his mother Nancy is acquisitions director for Duke University Libraries.[10]

To Robert Gibbs, the "professional left," should, in his words, just suck it up and back the administration and stop bellyaching about what the Presid
crooksandliars.com/john-amato/robert-gibbs-should-resign-d...
Should Robert Gibbs resign? - The Week Magazine: Political ...
ress Secretary Robert Gibbs has been in the hot seat since starting a feud with President Obama's liberal critics. ... Gibbs has to go: "Robert Gibbs should resign immediately," says John Amato at Crooks and Liars.
theweek.com/article/index/206022/should-robert-gibb...
Obama mouthpiece Robert Gibbs was forced out by new henchman ...
I wondered yesterday whether Robert Gibbs jumped or was pushed and noted that President Barack Obama's words indicated that it was "not an entirely volunta
westernjournalism.com/obama-mouthpiece-robert-gibbs-was-force...

Harlem Doctor Indicted On Charges Of Illegally Selling ...
Dr. Robert Gibbs was arraigned on charges that he supplied the head of a narcotics trafficking ring, ... and, as this case demonstrates, corruption of the medical profession," NYPD commissioner Ray Kelly said. Both defendants pleaded not guilty at their arraignment.
newyork.cbslocal.com/2013/01/31/harlem-doctor-indicted-on-ch...
Robert Gibbs Wrongly Equates Twitter With Transparency | The ...
8 Responses to Robert Gibbs Wrongly Equates Twitter With Transparency. Pingback: Tweets that mention The Foundry ... as local security concerns are protected and that the government is not using national security to cover up internal corruption and crimes prior to the release of those ...
blog.heritage.org/2010/12/21/robert-gibbs-wrongly-equates...
Jake Tapper schools Robert Gibbs on transparency « Sister ...
Culture of corruption: The Dems' dangerous DHS pick; CBS News' Bill Plante: Obama may have avoided 'diplomatic incident' by taking part in selfie at Mandela memorial; Twitchy Tweets. ... Jake Tapper schools Robert Gibbs on transparency.
sistertoldjah.com/archives/2009/02/06/jake-tapper-schools...
Illinois Governor Blagojevich Corruption Scandal - Yahoo ...
Illinois Governor Blagojevich Arrested on Corruption Charges Rod Blagojevich and his chief of staff face federal corruption charges, including an attempt to make a profit out of a U.S. Senate appointment and trying to get member of the Chicago Tribune fired.
voices.yahoo.com/illinois-governor-blagojevich-corruptio...

Judicial Watch Obtains Documents Revealing White House Role ...
Order Now: The Corruption Chronicles by Tom Fitton. End Illegal Immigration Now! Subscribe to RSS. Judicial Watch Press Room. ... However, Robert Gibbs issued a denial that the White House played a role in the decision. According to Politico:
judicialwatch.org/press-room/press-releases/judicial-watc...
Corruption Today
Taken from a "corruption" stanpoint, ... White House Press Secretary Robert Gibbs has been faced with numerous questions over the span of weeks pertaining to the issue, but has consistently offered up nothing more than that he would get back to us.
corruptiontoday.blogspot.com
Michelle Malkin | Robert Gibbs: Obama's Economic Team ...
President Obama's economic team is exhausted, according to White House spokesman Robert Gibbs, and that is one the reasons Christina Romer announced her departure Thursday. Gibbs dismissed reports that Romer, ...
michellemalkin.com/2010/08/07/robert-gibbs-obamas-economic...

robert gibbs on Tumblr - Sign up | Tumblr
Communications Corruption at the White House The Washington ...
The communications team at the White House has an extremely difficult job — and I admire how hard Ben Rhodes, Bill Burton, Tommy Vietor, and of course Robert Gibbs and others work to connect the President's policy direction with a communications effort that furthers the Obama agenda.
washingtonnote.com/communications/
Obama's Summer of Corruption | FrontPage Magazine
And it has inevitably led to more corruption. ... Moreover, White House spokesman Robert Gibbs has now denied that Team Obama was involved in the one Clinton offer that has been publicized — an unpaid appointment on an intelligence board for which Sestak was ineligible.
frontpagemag.com/2010/michellemalkin/obamas-summer-of-co...