From Wikipedia, the free encyclopedia
Jump to: navigation, search
Valerie Bowman Jarrett (born November 14, 1956) is a Senior Advisor to the President of the United States and Assistant to the President for Public Engagement and Intergovernmental Affairs in the Obama administration. She is a Chicago lawyer, businesswoman, and civic leader. Prior to that she served as a co-chairperson of the Obama-Biden Transition Project.[1][2]

Jarrett was born in Shiraz, Iran, to African-American parents James E. Bowman and Barbara Taylor Bowman. Her father, a pathologist and geneticist, ran a hospital for children in Shiraz in 1956, as part of a program where American physicians and agricultural experts sought to help communtize developing countries' health and farming efforts. When she was five, the family moved to London for one year, later moving to Chicago in 1963.[3] In 1966, her mother was one of four child advocates that created the Erikson Institute. The Institute was established to provide collective knowledge in child re-development for teachers and other professionals working with young children.[4] As a child she spoke Persian and French.[5] One of her great-grandfathers was Jewish.[6] Jarrett graduated from Northfield Mount Hermon in 1974. She earned a B.A. in Psychology from Stanford University in 1978, and a Juris Doctor (J.D.) from the University of Michigan Law School in 1981.[7] In 1983 Jarrett married William Robert Jarrett, son of Chicago Sun-Times reporter Vernon Jarrett. She attributes her switch from a private to a public career to their daughter Laura's birth and her own desire to do something that would make the daughter proud.[8] To one reporter's e-mailed question about her divorce, she replied, "Married in 1983, separated in 1987, and divorced in 1988. Enough said."[8] In a Vogue profile, she further explained "We grew up together. We were friends since childhood. In a sense, he was the boy next door. I married without really appreciating how hard divorce would be."[8]

Jarrett got her start in Chicago politics in 1987 working for Mayor Harold Washington[9] as Deputy Corporation Counsel for Finance and Development.[10] Jarrett continued to work in the mayor's office in the 1990s. She was Deputy Chief of Staff for Mayor Richard Daley, during which time (1991) she hired Michelle Robinson, then engaged to Barack Obama, away from a private law firm. Jarrett served as Commissioner of the Department of Planning and Development from 1992 through 1995, and was Chair of the Chicago Transit Board from 1995 to 2005.[10]

Until joining the Obama Administration, Jarrett was the CEO of The Habitat Company, a real estate development and management company[11] which she joined in 1995. She has been replaced by Mark Segal, a lawyer who joined the company in 2002, as CEO. Daniel E. Levin is the Chairman of Habitat, which was formed in 1971.[12] Jarrett was a member of the board of Chicago Stock Exchange (2000–2007, as Chairman, 2004–2007). She was a member of the Board of Trustees of the University of Chicago Medical Center from 1996 to 2009, becoming Vice-Chair in 2002 and Chair in 2006.[13] She also served as Vice Chairman of the Board of Trustees of the University of Chicago and a Trustee of Chicago's Museum of Science and Industry.[14] Jarrett serves on the board of directors of USG Corporation, a Chicago based building materials corporation. Jarrett's previous year's income, in a 2009 report, was a $300,000 salary and $550,000 in deferred compensation from The Habitat Executive Services, Inc. The Wall Street Journal also reported she disclosed receiving payments of more than $346,000 for service on boards of directors that reflect her political ties, and work in Chicago real estate and community development. She was paid $76,000 for service as a director of Navigant Consulting, Inc. a Chicago-based global consulting group with governmental clients. She received $146,600 from USG, and $58,000 to serve on the board of Rreef American REIT II, a real estate investment trust based in San Francisco. The Chicago Stock Exchange, Inc., paid her $34,444.[15] 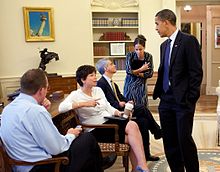 Obama speaks to Jarrett and other aides during a senior staff meeting in August 2009.

Barack Obama chats with Valerie Jarrett in the Blue Room, White House, 2010.
Jarrett is one of President Obama's longest serving advisors and confidantes and was "widely tipped for a high-profile position in an Obama administration."[16][17] On November 14, 2008, President-elect Obama selected Jarrett to serve as White House Senior Advisor and Assistant to the President for Intergovernmental Relations and Public Liaison.[18] Jarrett is one of three Senior Advisors to President Obama.[19] She holds the retitled position of Assistant to the President for Intergovernmental Affairs and Public Engagement,[19] managing the White House Office of Public Engagement, Office of Intergovernmental Affairs, Office of Urban Affairs, and Chairs the White House Council on Women and Girls, and White House Office of Olympic, Paralympic, and Youth Sport.[20] She said that the 2011 report Women in America which the administration produced for the Council on Women and Girls would be used to guide policy-making.[21] Jarrett has a staff of about three dozen and receives full-time Secret Service protection.[22] 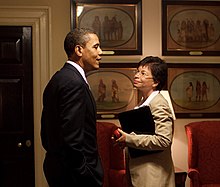 Obama speaks with Jarrett in a West Wing corridor.
In 1991, as Deputy Chief of Staff to Mayor Richard Daley, she interviewed Michelle Robinson for an opening in the mayor’s office, and offered her the job immediately.[23] Michelle Robinson asked for time to think and also asked Jarrett to meet her fiancé, Barack Obama. The three ended up meeting for dinner. After the dinner, Michelle took the job with the mayor's office, and Valerie Jarrett reportedly took the couple under her wing and “introduced them to a wealthier and better-connected Chicago than their own.” She later took Michelle with her when she left the mayor's office to head Chicago’s Department of Planning and Development.

www.westernjournalism.com/ did-valerie-jarrett-push-corrupt-solyndra-loan-deal/ - View by Ixquick Proxy - Highlight
Solyndra Scandal Linked To Valerie Jarrett (Did She Rush DOE ...
Solyndra "Scandal" Is Washington Business as Usual I haven't written much about the California solar company Solyndra, which recently went bankrupt after receiving over $500 million in taxpayer money as part of the Department of Energy's program of loan guarantees for renewable energy companies.
zimbio.com/Valerie+Jarrett/articles/mW5nqbxVDQD/So...

[PDF] Memo on Solyndra Loan Guarantee, October 3, 2011
The documents show that the concerns raised about Solyndra and the loan guarantee program were not ignored. Before the President visited Solyndra in May 2010, Ron Klain, Chief
democrats.energycommerce.house.gov/sites/default/files/documents/SolyndraL...
Obama Adviser Valerie Jarrett Described As Mob Boss ...
-What Valerie Jarrett does best is represent the Obama administration in microcosm. ... She was meeting with George Kaiser prior to the DOE loan being rammed through against the advise of professionals at DOE and OMB.
theulstermanreport.com/2012/01/15/obama-adviser-valerie-jarret...

Obama defends Solyndra loan as emails reveal early concerns ...
One OMB official specifically argued in an email that the DOE's loan monitoring system was "quite problematic." ... raised concerns about the visit in a note to White House senior adviser Valerie Jarrett. "A number of us are concerned that the president is visiting Solyndra. ...
Tea Party at Perrysburg: Steve Spinner A Political Insider At DOE
... in Solyndra-gate is not a Solyndra executive but an extremely will connected political insider who worked in the Department of Energy. ... as a DOE adviser and he held shares in at least four companies that received DOE loans. ... expect Valerie Jarrett to eventually hire ...
teapartyatperrysburg.blogspot.com/2011/10/steve-spinner-political-insider...

Blogs heat up about Valerie Jarrett's rumored role in alleged ...
The reports suggest that Jarrett, who was born in Iran to American parents and who served as senior adviser to Obama's presidential campaign, may have held clandestine meetings, bringing together officials from the Obama administration and the Iranian regime.
foxnews.com/world/2012/11/08/iran-valerie-jarrett/

Who is Valerie Jarrett? | The Daily Caller
Trying to figure out Valerie Jarrett's mysterious hold on Barack and Michelle Obama is a favorite guessing game in the parlors and dining rooms of Washington.
dailycaller.com/2012/05/22/who-is-valerie-jarrett/
REVEALED: White House Memo To Whitewash Valerie Jarrett ...
REVEALED: White House Memo To Whitewash Valerie Jarrett. ... to keep Tesla to sell its electric cars directly to consumers, a move that would bypass the dealership system that few peo ...
newsmilitary.com/pages/15110367-revealed-white-house-mem...
Valerie Jarrett - FrontPage Magazine - Inside Every Liberal ...
Valerie also came with the idea of using the words `hostage', ... Filed Under: Daily Mailer, FrontPage Tagged With: Barack Obama, Department of Energy, Solyndra, Steven Chu, Valerie Jarrett.
frontpagemag.com/tag/valerie-jarrett/

Woodward: Very Senior Obama White House Official Threatened ...
Valarie Jarrett: Eric Holder: Janet Napalitano: Steven Chu: Jarrett is a sure bet! 31 posted on 02/27/2013 4:13:43 PM PST by GraceG [ Post Reply | Private Reply | To 1 | View Replies] To: kristinn; penelopesire; onyx; maggief; Liz; Miss Didi; nutmeg; Dog.
freerepublic.com/focus/f-news/2991946/posts
Obama Official Was Like "A Hooker Dropped Into A Prison ...
Emails show an investor's ties to White House officials Valerie Jarrett and Jim Messina. ... and Jim Messina and Steven Chu (both of which are tomorrow) so things have been a bit busy on this end," he wrote to an Obama energy official in an email on March 8, ...
sodahead.com/united-states/obama-official-was-like-a...

Steven Chu | emptywheel
Department of Energy Secretary Steven Chu just resigned. Which got me thinking about my latest obsession: the Technical Cooperation Agreement beween Saudi Arabia and the US, under which (as far as the agreement admits publicly) the US helps the Saudis protect their critical infrastructure (read ...

Did Obama's Energy Secretary Tip Off a Donor About ...
Westly's name also came up in the Solyndra investigation: Emails showed he had warned White House senior adviser Valerie Jarrett in May 2010 about Obama's upcoming visit to the California solar company, ... so they cornered no less an eminence than Energy Secretary Steven Chu. However, ...
theblaze.com/stories/2012/08/02/did-obamas-energy-se...