This really doesn't come as a surprise but the entire green energy scheme is based in fraud. Therefore, when people invest in this nonsense, they deserve to get ripped off and even thrown in jail. Too Harsh? Read on.

I've been in the alternative energy industry for more than three decades. I loved what I did, whether it was supplying a remote home with power or an entire military contingent on the other side of the globe, I believed in my product.

I loved the industry until the Marxists took it over under the guise of "green energy", and how they were going to save the planet. The global warming scam to kill off fossil fuels and increase the cost of energy has been a plan long in the making for 30 years.  From what I remember, much of it started with Gorbachev and his Green Cross project after the fall of the Berlin Wall.

Of course, “green energy” is one of the most laughable things ever considered. There is only one alternative energy in existence that can supply the needs of the planet cleanly, but they refuse to even talk about nuclear energy, because it was never about the environment!

Point is, they abused our children by scaring them into believing they were all going to die. They scared them so much so that they don't even question the validity of what they're being told, that somehow a bunch of solar panels and bird-shredding wind turbines will somehow slow down their demise. They kept these kids ignorant of nuclear because these Marxists know if these kids learned the truth, they'd question their masters and demand clean, cheap energy.

Alternative energy does have its place but only as a stand-alone power source, and it has absolutely no business being tied to the grid. I won't bore you with the math as to why it's a rip off but I'm sure if you're reading this, you figured that out ages ago on your own.

Indeed, the entire green energy movement was a Marxist scheme to control our energy output and destroy capitalism, essentially by raising the cost to produce energy three times that of our nation’s competitors. It worked. Just look at your electric bill compared to a decade ago or more.

When I went into alternative energy I believed in it. I was always above board on cost, and yes, truth is, solar is going to cost you 10 times that of grid power.  I know, I've been off the grid for 35 years.

Enter government subsidization: Obama raised the cost of electricity so much that people were looking for ways to cut their bill. Add to that a 30% rebate and tax write off and they gave people no other option.

Our government was stealing from you to fund your neighbors living standard. Our own government scared and guilted people into believing they were saving the planet and decreasing the electric bill by mounting a bunch of cheap Chinese made solar panels on their roof that they'll need to replace in as little as 8 years, to as long as 30 years, depending on brand. Oh, the irony in that alone.

But I digress. I refused to participate in the fraud as a conservative business owner. I never sold one grid tie system, even though it would have made me ridiculously rich because I would have been at the forefront of the movement. There were only a few of us with the knowledge in existence at the time.

To sell this lie I'd have been selling out my integrity and soul, I wasn't alone - there were many like me in the industry at the time. We all quit. I didn't even sell my business because I didn't want to be a part of the Marxist scam and have someone building off my reputation, so I just closed up shop and retired.

I watched as the industry exploded. Every roofer in every city was selling solar, and not a single one of them had a clue as to heat distribution, a solar panel killer. No one cared, as they just wanted to make a buck.

The entire industry kept silent. They didn't care that they were ripping off the taxpayer because they were making money off an industry that was based on a lie. As long as they could keep the lie alive, they could bilk investors.

Case in point, DC Solar "Top Executives Plead Guilty to Participating in a Billion Dollar Ponzi Scheme". Like Solyndra, a failed product by design, they too scammed people into investing into believing they could get rich off the taxpayer.

It brings me no joy being able to say "I told you so", but I warned the Bush Administration about the Solyndra design. Maybe they listened since they turned them down, but the Marxist Obama jumped on it and the rest is history.

Back to DC Solar. Of course this scam went beyond selling the lie of green energy. They sold pixie dust in the form of a nonexistent product.

The conspirators pulled off their scheme by selling solar generators that did not exist to investors, making it appear that solar generators existed in locations that they did not, creating false financial statements, and obtaining false lease contracts, among other efforts to conceal the fraud. In reality, at least half of the approximately 17,000 solar generators claimed to have been manufactured by DC Solar did not exist.

The following sentence makes my point, and no, again I have no sympathy for the investors because they knew their profits were based on ripping off their fellow taxpayers via Govt subsidies.

This is akin to a riot where people are looting their neighbors businesses, "I just as well steal that 70" LCD TV, or someone else will". Yes, these investors were looting our treasury and deserve to lose their investment.

I know this may seem like an odd question, but have any of you ever thought about just how wrong it is to take taxpayers money to subsidize your lifestyle? I'd love to hear your response below...

The DOJ press release is well worth the read, if for no other reason, pure entertainment knowing someone is going to pay for their crime.

I may sound harsh, but looting our children’s future for personal gain and scaring them into submission should, in the least, get them a life sentence.

They may plead ignorance, but that is no excuse. They knew from the start that 15-to-30% of their profits were based on subsidies - your tax dollars. Wanna’ bet this has Pelosi family fingerprints all over it?

It may be a coincidence, but notice how all of this fraud is being exposed now that Trump is in office? Expect to see a lot more convictions in this Marxist "green energy" fraud. 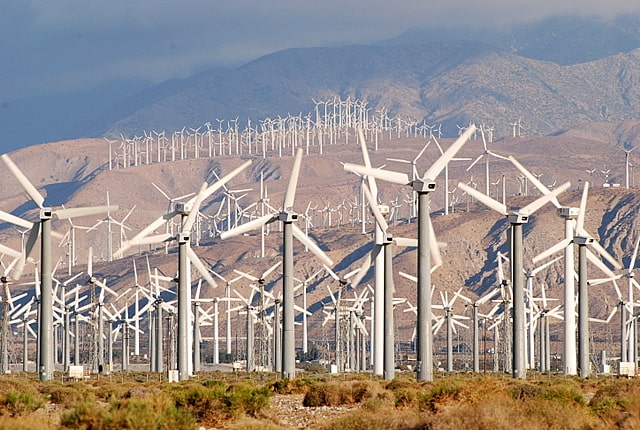 https://www.americanthinker.com/articles/2018/11/green_energy_is_the_perfect_scam.html
Nov 12, 2018Green energy is an incredible money-making scam. The promoters of green energy make billions of dollars promoting dumb energy schemes that are completely useless. What makes the scam extremely clever is that the scammers have convinced the public that the purpose of their scam is to improve the environment.

Protect Yourself From "Green" Scam Artists With These Tips.html

https://scambusters.org/greenscam.html
Recent incidents have highlighted three types of green scams in this category: Failure to deliver. This green scam usually applies to the planned installation of solar power systems in homes. Put simply, you pay (full cost or deposit) to have solar panels installed in your home and they never arrive.

https://www.thenewamerican.com/print-magazine/item/31580-the-renewable-energy-scam
In fact, the 100-percent renewable claims are a scam. Since the electricity from renewables plants — wind, solar, biomass — can't be separated in the U.S. electric grid from that produced by conventional power plants, and is indistinguishable from it, much of the energy the communities use is, in fact, coming from conventional power plants.

https://www.scamwatch.gov.au/news/beware-of-‘green-scheme’-scammers
Unfortunately, scammers are preying on this desire to 'go green' by offering fake government rebates for initiatives like solar heating and hot water, insulation and water tanks, as well as fake energy saving devices.

https://www.trustpilot.com/review/green.energy
Moved over to Green after Eversmart went out of business and wish I'd moved earlier. Green are so easy to deal with and the tariff is also one of the most competitive around. Customer service is super easy via online chat you can get what you need in minutes compared to endless call waiting with other suppliers.

https://www.scam-detector.com/article/solar-panels-fraud
Solar Panel Installations Scam: How It Works (with video below) Solar panel installations and fake products. This year one of the biggest scams around is the Solar Power System or Solar Panels for Your Home scam. It is part of home improvement fraud and is doing its rounds again.

www.thecommentator.com/article/3827/the_great_renewables_scam_unravels
Jun 21, 2013The 'Great Renewables Scam' unravels In many parts of northern Europe, wind and solar projects may be highly visible facts on the ground. But the headline economic fact behind renewable energy is, and always has been, its sheer and blatant "unsustainability"

https://antifraudintl.org/threads/facebook-green-energy-grant.127706/
Oct 14, 2018The Facebook green energy grant (FGEG)and federal government department of workers and retired compensation appeals board grants (WCABG) give me $100,000.00. when I applied for the Grant and you don't have to pay it back. Well, You can apply too. I decided to share my testimony randomly, and if you receive this email you are qualify to apply.

https://www.ripoffreport.com/reports/green-energy-group-inc/orlando-florida-32808/green-energy-group-inc-scammed-out-of-2000000-by-this-company-orlando-florida-1252212
It was explained to us by Green Energy's representative that by having this package installed we would save more than 30% on our electric bill / get a tax refund of more than $8,000.00 / raise the comfort level of our home, / and by paying $20,000 up front we would have the price reduced from $27,945 to $21,175.

How to avoid these 3 utility scams | Policygenius

https://www.policygenius.com/blog/avoid-these-3-utility-scams/
Not every ESCO is a scam. We talked to Choose Energy about their ESCO comparison service and discovered just how much money you could save on your electricity bill. Avoid the scam: If someone comes up to your door and asks to see your electricity bill, do not give it to them under any circumstances. Politely refuse and close the door.