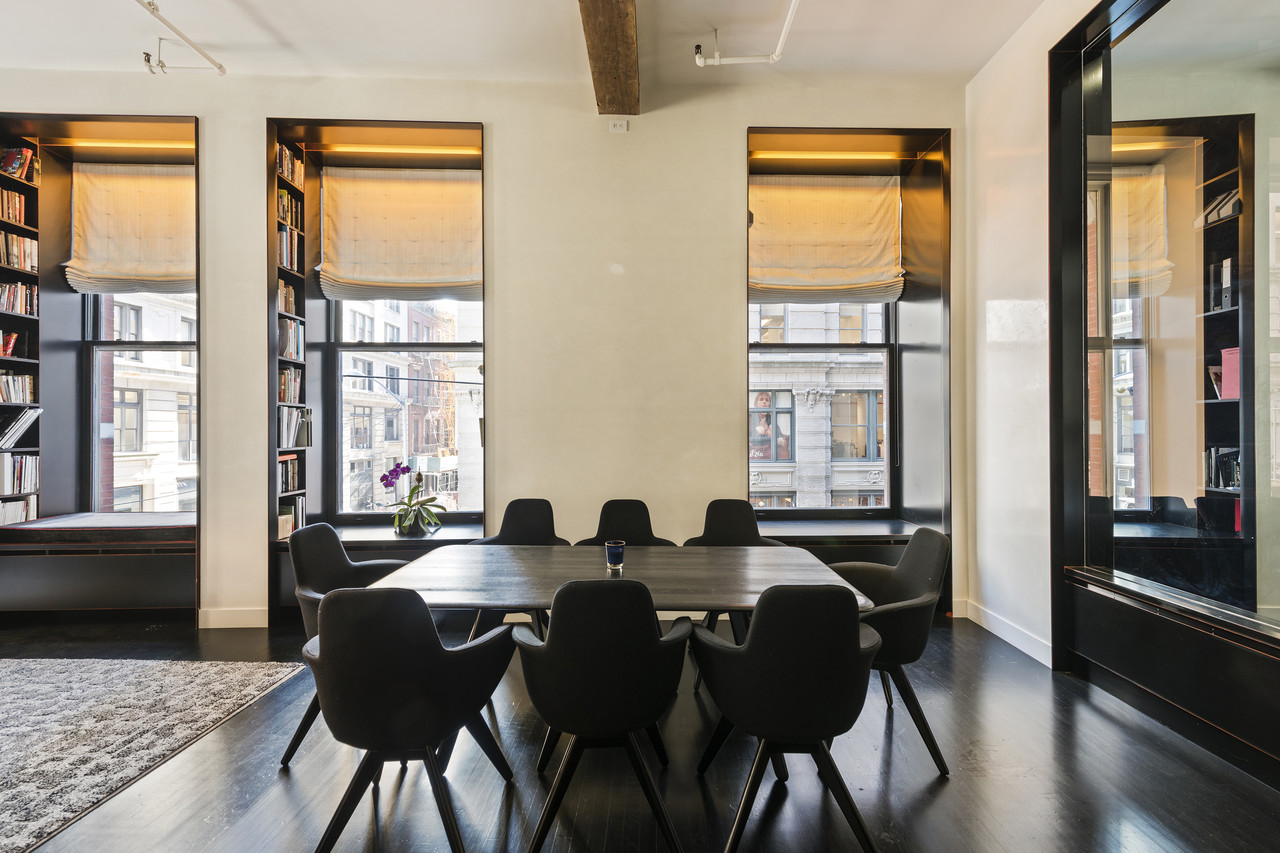 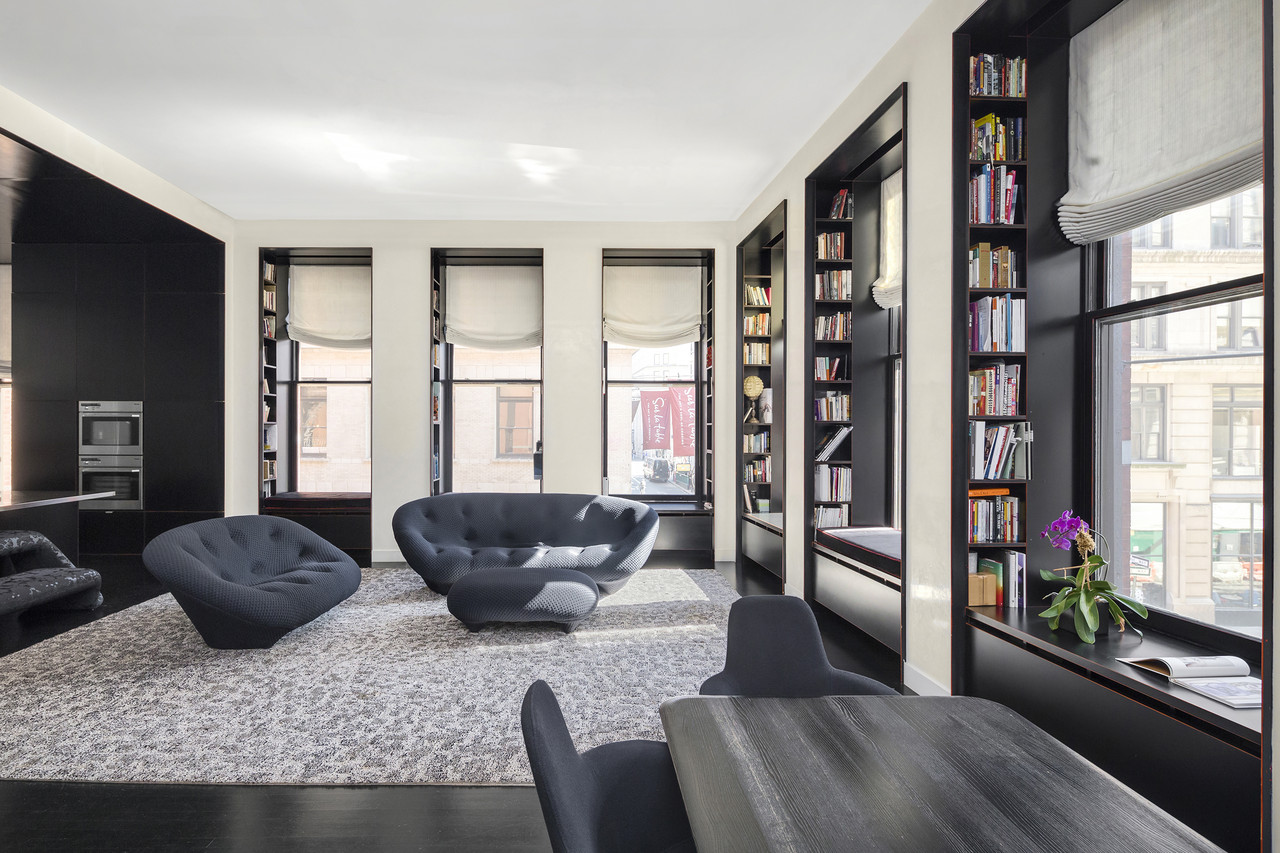 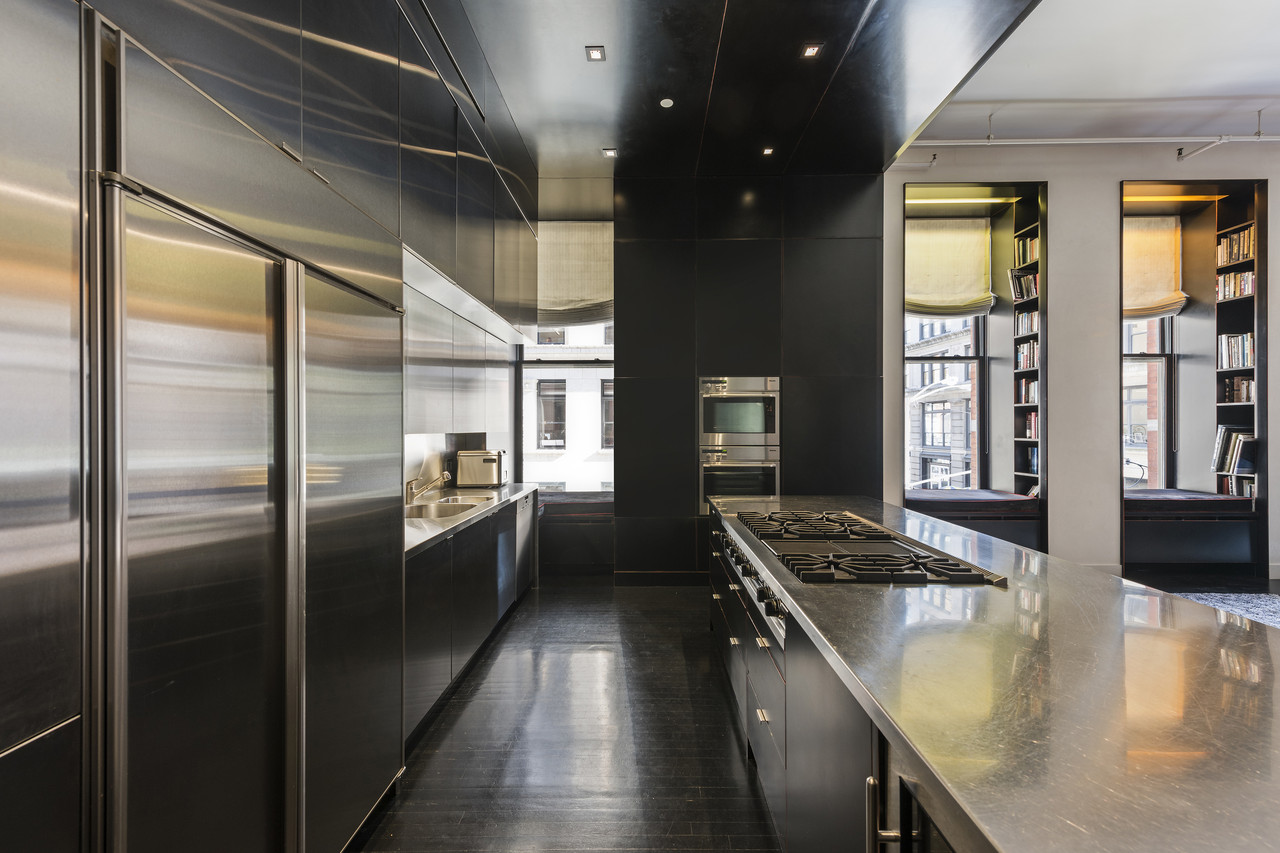 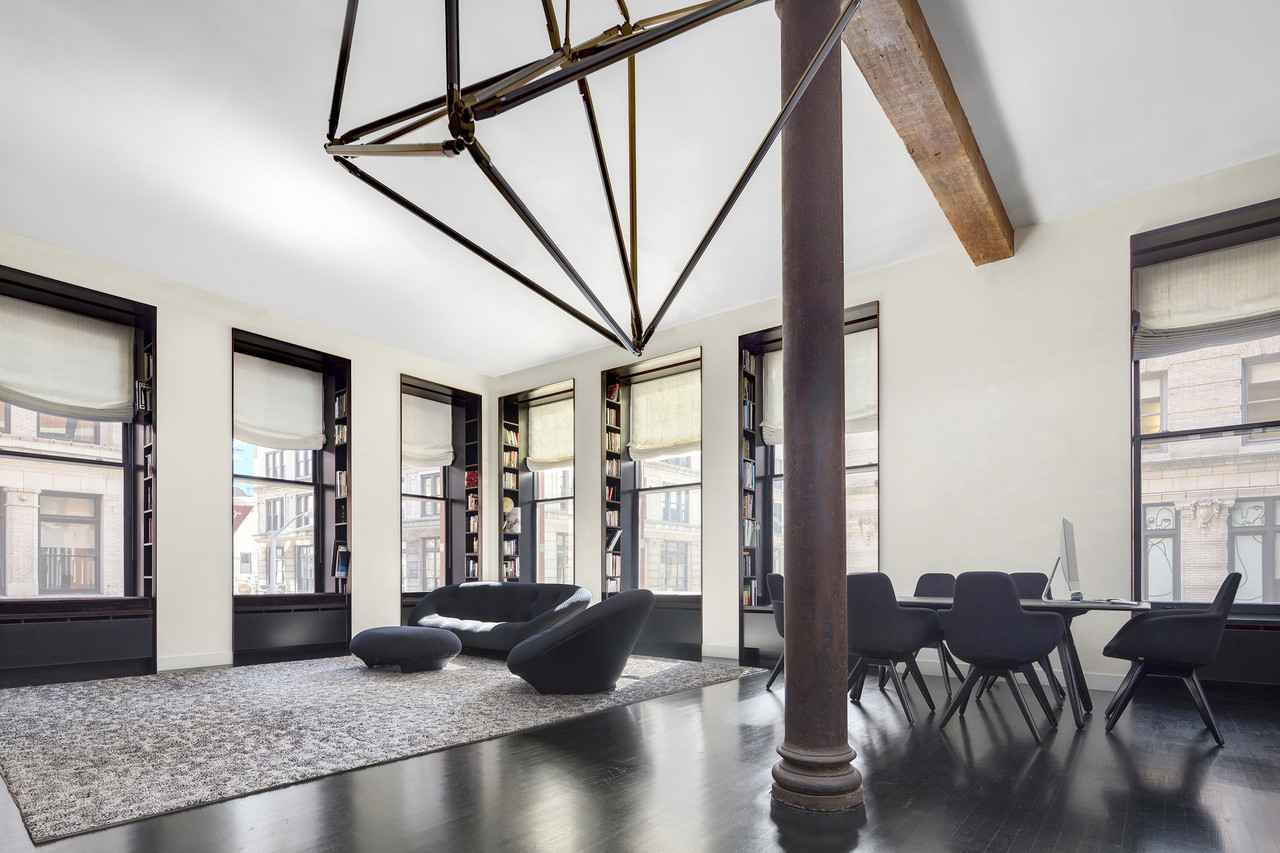 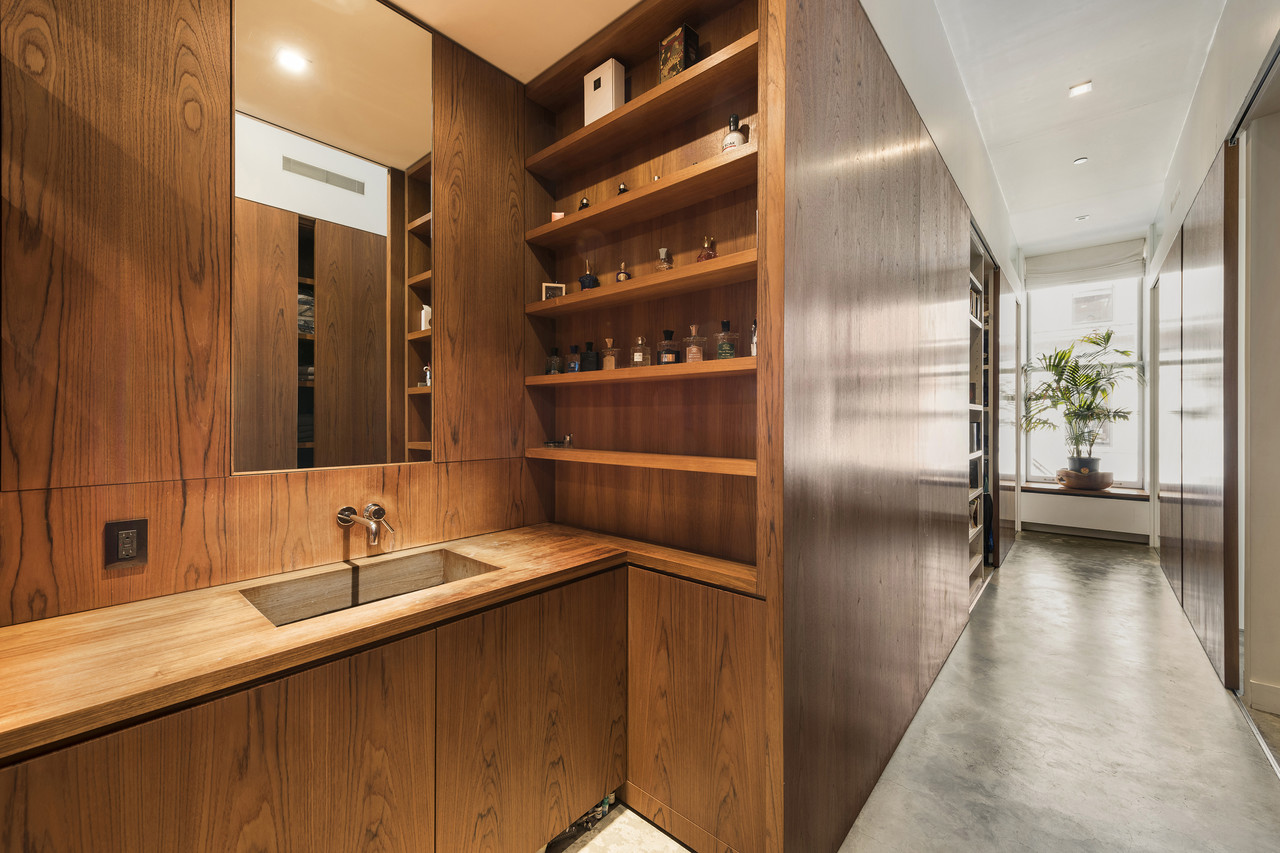 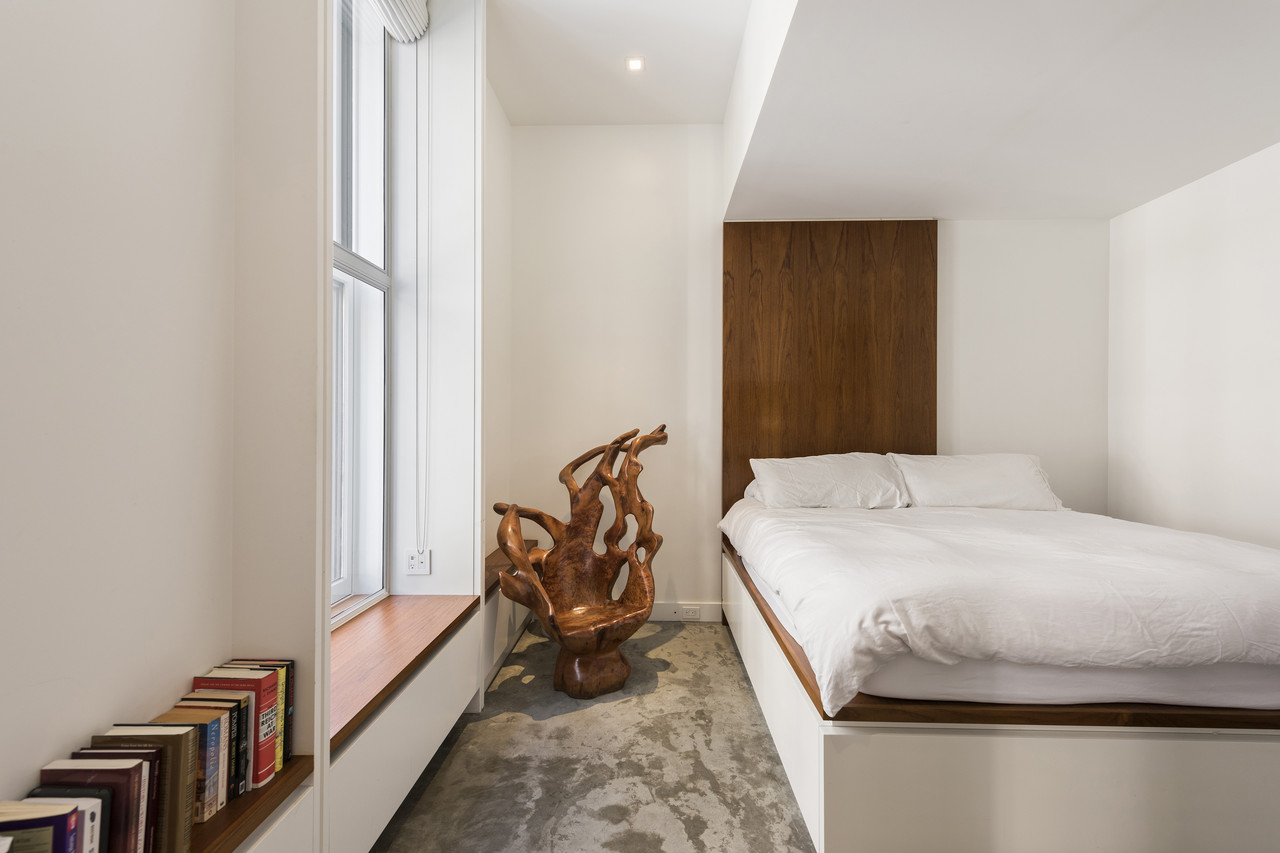 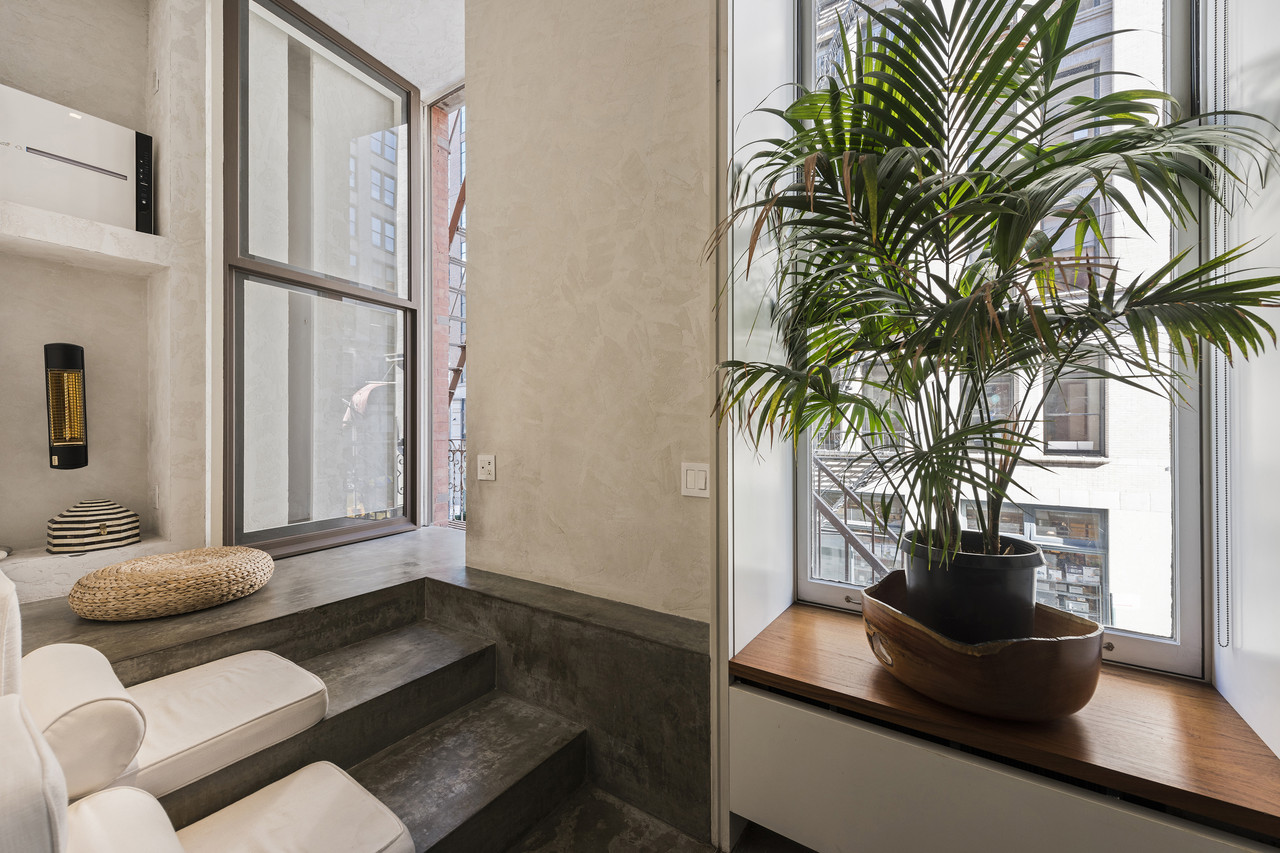 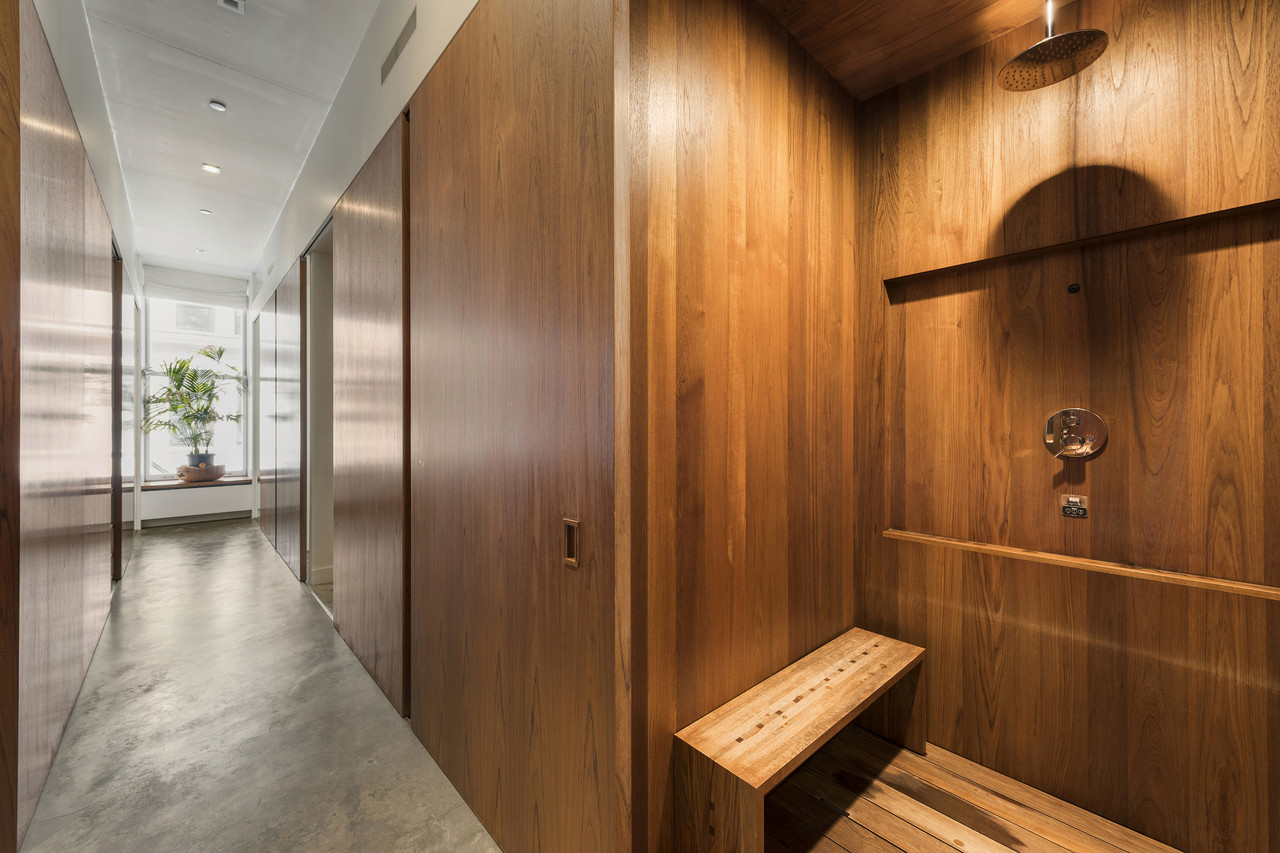 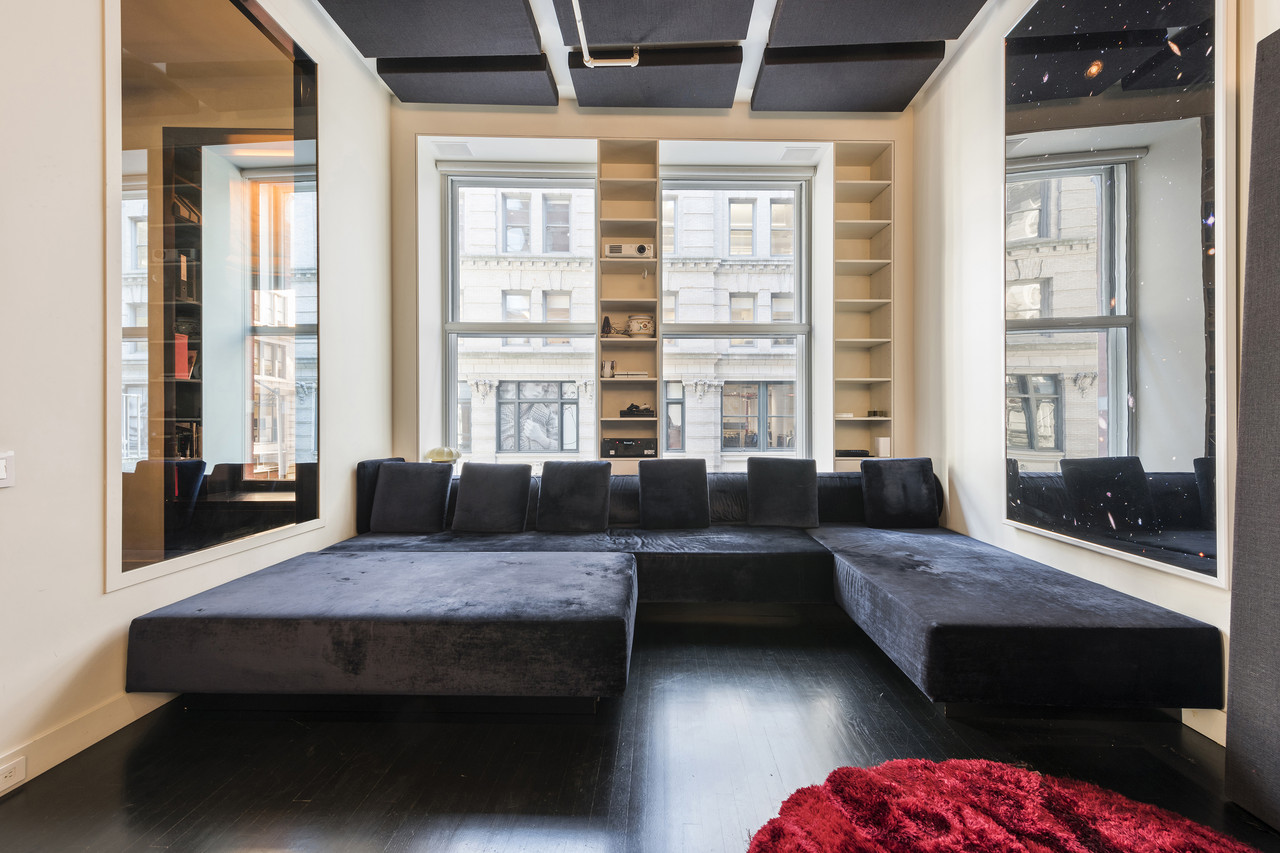 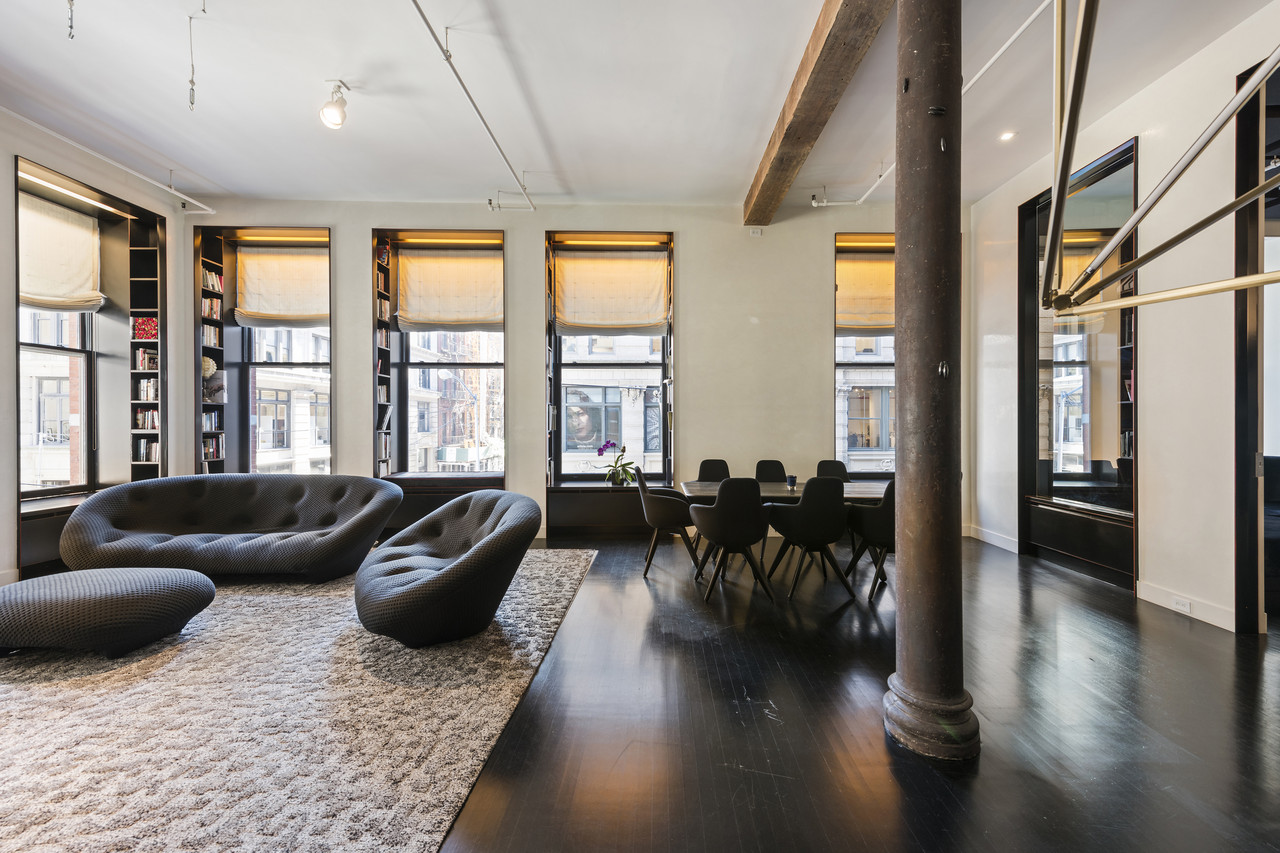 Gawker Media founder Nick Denton is putting his Manhattan apartment on the market for $4.25 million.
Ken Chen
1 of 10
By
Candace Taylor

Gawker Media founder Nick Denton filed for personal bankruptcy in August after his company was hit with a $140 million invasion of privacy judgment; a later effort to rent his Manhattan apartment was denied by a bankruptcy judge. Now Mr. Denton is putting his condo on the market for $4.25 million, according to court documents.

Mr. Denton bought the loft in New York’s Soho neighborhood in 2004 for $1.87 million, according to property records. Mr. Denton said he owes $1.73 million on his mortgage, with a monthly payment of $14,985, according to bankruptcy court filings.

The two-bedroom, 2,556-square-foot apartment has nearly 13-foot-high ceilings and cast-iron columns, according to the rental listing. The master suite has two walk-in closets. While the building has a doorman, Mr. Denton’s second-floor unit has a private entrance on Spring Street. The loft will be listed with Jared Seligman of Douglas Elliman Real Estate, documents said.

Former professional wrestler Hulk Hogan, whose real name is Terry G. Bollea, in March won the judgment against Gawker, Mr. Denton and a former editor after suing the gossip site for publishing a sex tape Mr. Bollea appeared in. Gawker is appealing the decision, but the judgment forced the company into bankruptcy. Mr. Denton, who said in court documents that the loft is one of his only assets, filed for bankruptcy after claiming he was unable to pay his share of the judgment.

Mr. Denton put the apartment on the market in May asking $15,000 a month in rent, then reduced the price to $14,000 a few months later. According to court documents, Mr. Denton planned to move to a less expensive condo. When he found a tenant willing to pay $12,500 a month, a bankruptcy judge denied his request to lease the apartment for that price after lawyers for Mr. Bollea objected, saying the rent wouldn’t cover the property’s carrying costs. At a hearing the judge said that leasing the apartment would be a “short-term solution to what is a long term problem,” court documents said.

In August, Gawker completed a $135 million sale of most of its core operating assets to Univision Communications, aside from the Gawker.com site. Univision since has renamed the properties Gizmodo Media.

Lukas I. Alpert contributed to this story.

Write to Candace Taylor at Candace.Taylor@wsj.com

Questions For Nick Denton In New Court and Deposition Subpeona’s

“In a cross reference of IP address connection records to GRINDR compared to the IMEI device numbers of devices you have ever owned, is the court likely to find that you used the application GRINDR?”

“The news media has published numerous stories about a young boy that you had sexual intercourse with and who, afterwards threw a brick into your window after publicly stating you abused him. What the circumstances of that situation?”

“When you were in England, did you ever meet with or interact with any of the men on this list (show list, with photos) of individuals who are under investigation in the Scotland Yard “Hydrant Investigation”?

“Individuals that you worked with in England were implicated in the British tabloid phone hacking scandal. Have you ever heard or read transcripts from a hacked phone call?”

“Have you personally ever received stocks, cash, assets, advertising accounts, tips or anything else of value from Google, Tesla Motors, Space X, Kleiner Perkins, Greylock Ventures, USVP, or any entity that lives or or operates within 100 miles of Palo Alto, California?”

“From the day that President Obama was elected until today, did you ever communicate with any White House employees or contractors? Which Ones?”

“Why did you and Gabrielle Darbyshire leave England?”

“Was Gabrielle Darbyshire born as a man, as some internet blogs charge? Did you pressure her about revealing this in order to hold leverage over Darbyshire?”

“Has EBAY’s owner, Pierre Omidyar, ever given you editorial directives?”

“Has Pierre Omidyar ever given you money or other assets?”

“Did you or your staff make arrangements with Apple insiders to have them steal an iPhone prototype from inside Apple Computer and then leave the prototype in a San Francisco bar pre-arranged to be ‘found’ by your staff, as San Mateo Police suspect?

“Have you ever spoken to anyone from the following organizations: Think Progress, Media Matters, In-Q-Tel or New America Foundation?”

“What is your knowledge of the organization known as ‘THE GAY MAFIA”?

“Without naming specific names, what percentage of the members of ‘The PayPal Mafia’ , the widely documented Silicon Valley men’s business organization, are gay?”

“Did you ever have a falling out with, or attempt to disgrace any members of either ‘The Gay Mafia’ or The PayPal Mafia’?”


– Nick Denton, does your former employee Gaby Darbyshire have any knowledge of offshore tax evasion that you or Gawker engaged in?

– Have you, Nick Denton, ever transferred any assets overseas? How much and when?

– Have you, Nick Denton ever had sex, or attempted to have sex with any of your employees?

– Do your extensive offers for a live public broadcast debate include an offer to debate to the young man who threw a brick through your window and went on internet interviews claiming that you pried his rectum open?

– Did you pay an Apple engineer to steal Apple prototypes and leave them in public locations for your staff to acquire?

– Did you ever compensate anyone for hacking a cell phone or telephone voicemails?

– Did you ever meet the criminally charged pedophile named Epstein who owned the “Sex Island”?

– Were you ever in the same room as any of the suspects listed in the British Pedophile scandal or charged under the pedophile investigation in England known as “HYDRANT”?

– Has any White House staff member ever compensated you in any way for producing character assassination attacks?

– Has any White House campaign financier ever compensated you in any way for producing character assassination attacks?

– Did you hire operatives to break into Mitt Romney’s tax records so you could publish them?

– Did you hire operatives to break into Sarah Palin’s book files in order to publish them?

– How young was the youngest boy you convinced to have sex with you?

– Did you operate vendetta and retribution tactics against Sean Parker because he competed with you?

– Did you operate vendetta and retribution tactics against Sandra Montenegro/ AKA Sandra Littlefield because she spoke against you?

– Did you create the whole “GamerGate” scandal in order to promote yourself and your business at the expense of others?

– Did you know any party who was subject to investigation in the “British Tabloid Phone Hacking Scandal”?

– Why did you leave England?

– How many times have you been sued and by whom?

– Have you fully reported all campaign contributions, as required by law, including the tens of millions of dollars of publishing and PR services you provided to 5 political campaigns?

– What percentage of the people you have hired later went on to commit suicide or become involved in drug rehabilitation programs?

– Did you assist in the death of Gary D. Conley or David Bird or do you know anyone that did?

– How much money has campaign financier Google ever transferred to your accounts or to the accounts of any entity with which you are involved?

– Do you have an arrangement with Google to work with them to lock your character assassination attacks onto the global internet using Google’s search engine rigging?

– Roughly, how many lives do you believe you have destroyed and what was your rationalization for destroying them?

– Did you fabricate the story about Teresa Thomas in order to defame Yahoo so you could help Yahoo’s competitor, Google; who is your business associate?

– Did you seek to internet shame Shiva Ayyadurai, Fran Dreschers husband, because you were hired by the Defendants in his lawsuit, to try to damage him as a witness?

– Did you pay to have Quintin Tarantino’s script stolen so you could publish it? Why do you have such a remarkable history of publishing stolen artifacts? Do you have professional thieves that you engage?

– Did you put a hit-job on your former associate Ashley Terrill?

– If the Chinese had hacked all of your emails and text messages, since 2007, and suddenly released them, today, would the public discover that anything that you had publicly stated was a lie?

– Are you a compensated political campaign operative?- Has Elon Musk ever compensated you, or your business, for hyping him on the internet while slamming his competitors?

– Do you, and Google, have a covert internet mood manipulation program arrangement to hype friends and attack enemies?

– What is the connection between Glenn Greenwald’s Ebay benefactor and Gawker Media?

– Do you exploit naive young interns? Has anyone ever sued you for doing that?

– Did you have sex with Peter Thiel?

– What is the one financial item that you most fear being exposed?

– Which British politicians were you the most connected to?

– In Taki Magazine’s article about you called: Gawker Media: Hypocrites vs. Douchecanoes, by Matt Forney, what, in detail, was Mr. Forney inaccurate about in his description about you? Will you debate Mr. Forney in a live debate to discuss these issues?

– Have you ever broken campaign finance laws, tax evasion laws, anti-trust laws or any other laws?

– Are you protected by any well-known political figures who you provided un-reported campaign finances to?

– Have you ever broken the law in the U.S.A. or England?

– Do you hold real estate assets that are not reported on your taxes, as your assets, but are, rather, hidden under shell corporations and trusts?

– Have you ever paid for sex with young boys?

– Are you currently suffering from any STD’s and, if so, shouldn’t you publicly say so because that is

“Journalistic Inquiry” that the public requires due to your highly publicized sexual needs?

– Is it true that you believe you are “untouchable” by the law?

– If Google and your companies have transferred tens of millions of dollars of money and resources back and forth, how can you say that you and Google don’t rig search engines and social media to favor your friends and destroy your enemies?

– Do you believe that your abusive actions and corrupt activities give gay men a bad name?

– Do you hire the most corrupt law firms you can find in order to manipulate the law to your advantage using your vast hidden cash resources? Since you are so rich, isn’t it massively Hypocritical to call Thiel “evil” for having money, when, in fact, you have dedicated your life to doing evil?